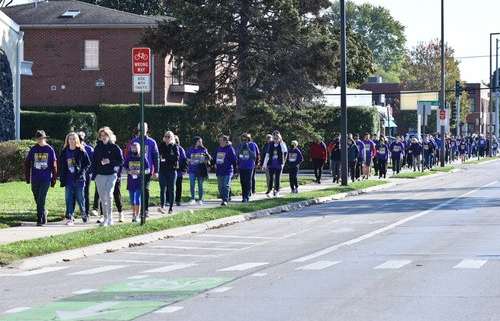 The walked began on the western edge of Evanston and ended in downtown Skokie at the Skokie Heritage Museum, near the future site of a new 16-unit apartment building to house Impact participants. At the endpoint of the event, walkers enjoyed a catered lunch from La Cocinita and speeches from longtime Skokie Village Trustee Edie Sue Sutker and Skokie Hospital President David Rahija. “It was great to see so many new supporters of our work walking alongside those who have been with us for many years,” said Patti Capouch, Impact’s Executive Director.

The Stride into Skokie event, which was put on with support from presenting sponsors Exquinix and NorthShore University HealthSystem, was symbolic: After over 30 years of Impact’s buildings exclusively located in Evanston, the agency is expanding its housing portfolio into Skokie. Along with the new 16-unit building, Impact also recently acquired another 6-unit apartment building in central Skokie.